Outer Banks is one of the hottest shows to come to Netflix in 2020. The 10-episode teen drama is filled with action, adventure, mystery, romance, and Lowcountry landmarks! As its title suggests, the show is set in the Outer Banks of North Carolina. However, the Netflix hit was filmed across Charleston. From Washinton Square Park in downtown Charleston to the lush golf courses of Kiawah Island, this show covers the Lowcountry sites you love. Read on to discover several of our favorite Outer Banks filming locations in Charleston and Kiawah Island!

Have your own adventure-filled getaway during your next trip to the Charleston area. Visit the iconic sites listed below and use our Kiawah Island Destination Guide for even more local recommendations!

The Ocean Course at Kiawah Island Golf Resort is the venue for the Kooks-only Midsummer Night’s gala. The Ocean Course is one of our favorite Kiawah Island golf courses. It’s earned its spot as the No. 4 Public Golf Course in the U.S. by Golf Digest. The course boasts beautiful views and a unique challenge, as it’s affected by the winds blowing off the Atlantic Ocean. A visit to this golf course is truly a first-class affair, so be sure to pack your finest garments. This oceanside golf resort is as enchanting in real life as it is on-screen!

Shem Creek appears in nearly every episode of Outer Banks. The kids spend most of their days on the HMS Pogue, finding adventure and sometimes trouble. One of the most recognizable Shem Creek locations is the eatery “The Wreck.” Kiara, the show’s female protagonist, parent’s own and operate the establishment where the teens go to refuel on fries and soda after a day of solving the mystery of the Royal Merchant. You can visit The Wreck of Richard and Charlene during your next trip to the Lowcountry.

Lighthouses are a staple in any coastal town, and Charleston has plenty! Folly Beach’s Morris Island Lighthouse makes a few appearances in Netflix’s Outer Banks as the “Redfield Lighthouse.” This lighthouse can be seen in the first episode of the show, which is when many Charleston locals discovered that the show was filmed in our backyard!

There’s a wealth of historic sites in Charleston, SC. The antebellum-style homes, cobblestone streets, and draping Spanish moss in downtown Charleston invite you to step back in time during your visit. Outer Banks viewers can get a glimpse of downtown Charleston’s charm with a scene filmed at Washington Square Park. John B. and Sarah Cameron stroll through this park on their adventure to the UNC Chapel Hill Law Library, which is actually the Gilliard Center!

Need a makeover? There’s no better place to transform from Pogue to Kook than the shops on King Street in downtown Charleston! Ben Silver, located at 149 King Street, is where Sarah Cameron takes John B. for his much-needed makeover before they infiltrate the UNC Chapel Hill Law Library. 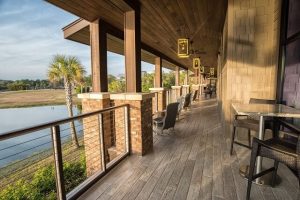 Stay at Andell Inn for a taste of the Kook life. Our Kiawah Island hotel boasts luxurious guest rooms and premier amenities. Even better, Andell Inn is located within driving distance of all the Outer Banks filming locations!

Book your room at Andell Inn to have your own Charleston adventure!